My short autobiography: A red wine cork in a white wine bottle

The idea for the song “Red Wine Cork” came to me after lecturing at a conference in Vail, Colorado, about the brain and how some people are awkward, quirky, and have an uneasy time navigating through society.

After speaking I stopped at the hotel wine bar for a glass. While looking at all the different bottles lined up, I noticed a red wine cork in a white wine bottle. At this moment, I realized I was one of the characters in my own lecture. The song flowed from me very quickly.

Wine corks vary in structure, and the greatest variation is between those of reds and whites. The natural cork for red wine is longer, sturdier, and slightly porous, enough to allow very small beneficial amounts of oxygen into the wine helping it age and improve over a longer time. White wine is usually ready for drinking much sooner, so their corks tend to be shorter and denser.

The idea of a red wine cork in a white wine bottle symbolizes a deviation from some expected norm. My own odd, eccentric existence was a social reality I never really admitted. I would come to fully realize it many months later when accepting the song as being autobiographical, my own wild and poetic twist to the age-old adage of trying to fit a square peg into a round hole.

It was one of the very first real songs I wrote after taking up songwriting in 2002. While most songs are in 2/4, 3/4, or 4/4 time, knowing almost nothing about being a lyricist and less about music, I wrote “Red Wine Cork” in a stumbling 5/4 time, which is rather unusual. This made it an awkward folk tune, although the famous jazz standard “Take Five” by Paul Desmond and made famous by Dave Brubeck is a 5/4 masterpiece.

While this song just flowed out of my mind and I was initially pleased with it, the awkward music and quirky lyrics were much more difficult to play and sing than others I wrote. Musicians I enlisted to help accompany me, found it difficult, too. A retired music professor named Ron, previously an arranger for the Ed Sullivan Show, tried explaining the 5/4 tempo issue, but it was beyond comprehension at that point in my fresh music journey.

On that day I wrote it, one theme of my lecture was how everyone is a unique individual. Over the years, the fact that this song continues to touch so many people, further brings out the awareness that we are all quirky in our own way, helping us be more creative and special.

“Red Wine Cork” was recorded three times and did not quite represent the original feeling I had of the song. The newest version, with tweaked lyrics and more to my liking, is now a separately released single (click the image below to hear it). I hope you enjoy and share it. 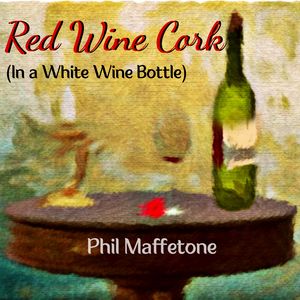